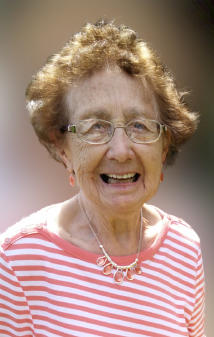 Morin, Marlys, 90, of St. Paul, passed away peacefully on June 15, 2022. She was preceded in death by her parents, Elliot and Gertrude Snesrud; and brother, Dale. She is survived by her husband, Jim; daughters, Gail Lawler and Faye (Dennis) Siegler; grandchildren, Lindsey, Tracy, and Andrew Lawler and Peter and Nora Siegler; and other family and friends.
Marlys grew up on a farm in Webster, Minnesota. In her early years, she attended a one room school house and then graduated from Northfield High School in 1949.  She attended business school in Minneapolis and worked for the Buick company in the Foshay Tower.
She met Jim through his best friend in January 1953.  They were married in St. John's Lutheran Church in Webster June 26, 1954.  They had two girls, Gail and Faye. She was a stay at home mom until 1967 when she began working as a contact lens technician for an ophthalmologist in St. Paul for 23 years.  After retirement, she volunteered weekly at the Marian Center assisting residents in the beauty salon.
In her retirement, she also enjoyed traveling with her husband, Jim.  They visited their daughter, Faye in Texas and California yearly.  They also enjoyed trips to Hawaii, Alaska, Florida, Vancouver Island, the Netherlands and England.
She loved spending time with her grandchildren at their lake home near Willow River.  She was willing to attempt new activities, such as cross country skiing, paddleboats, and flotation devices on the lake, even though it was not her forte.
Marlys enjoyed playing cards, gardening, fishing, and going to her granddaughters' softball games.  She was a sports fan, being a particularly ardent Twins and Vikings supporter. She was also a loyal fan of the Chapel Strings orchestra of which her husband was a member for 50 plus years.
She was a long time member of Bethlehem Lutheran Church where she attended Bible class, served on the altar guild and helped with child care in the Hmong ministry.
She struggled with Alzheimer's disease for the past 15 years.  We will miss her dearly and are grateful she is now free of this devastating illness and with her Lord.

A funeral service will be held at 11 AM on Saturday, June 25, 2022 at Bethlehem Lutheran Church, 655 Forest St N, St Paul, with visitation an hour prior. Interment to follow at Forest Lawn Memorial Park. In lieu of flowers, donations preferred to the Alzheimer's Foundation, https://alzfdn.org/.

To order memorial trees or send flowers to the family in memory of Marlys Morin, please visit our flower store.