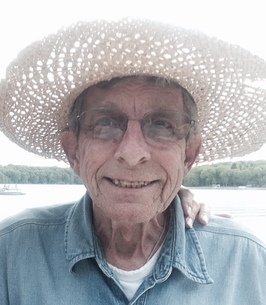 Hand delivered by a local florist

James D. Compton (Jim) Age 82 Of Hugo, MN and formerly from Lakeview, AR, Cambridge and Isanti, MN Passed away suddenly on Tuesday, January 28th He was preceded in death by his parents Theron P. and Barbara A. Compton, sister Sheron Pommier, and 2nd wife Patricia A. Compton. He is survived by his brother Richard (Lynn) Compton; First wife Maryanne Goulet (James), children James R. Compton, Jill (Richard) Smith; stepdaughters Roberta (Edwin) Klatt, Ruthann Wines, Susan Wines; grandchildren James (Jennifer) Compton Jr, Michael (Pooja) Compton, Nicole (Bryan) Kazmierczak, Kayla A. Smith, Clayton R. Smith; Step grandchildren Kendal (James) Langer, Rylan Klatt, Racheal (Chimbiko) Akarolo, Robert Mays; 8 great grandchildren; His dog Maddie and many friends. He was born on October 6 th 1937 to Theron and Barbara Compton in Red Wing, MN. As a child he enjoyed fishing, building things, and planting. His dad was a tackle salesman and who also loved to fish. As Jim got older, he also enjoyed deer, pheasant, partridge and duck hunting. In later years, he didnâ€™t hunt anymore, but always loved fishing. Jim went to high school in Bloomington, MN and after high school began working cleaning carpets and walls. After that, he went into a family business with his brother and dad creating the Electric Reel Corporation of America (ERCOA), a dye casting company, building the electric reel. He was one of the first members of the Hugo Lionâ€™s Club and continued his career by opening a bait shop in White Bear Lake. He and his brother then opened a car repair/bait shop in Anoka. He began working at Strait Anderson, an aluminum foundry, until his brother asked him to be the plant manager at the ERCOA Pontoon Company overseeing the operation and production of pontoons and water bikes. It was the position he held until his retirement. Jim and Pat moved to Lakeview on Bull Shoals in Arkansas to enjoy retirement life including being on the water fishing and boating. They moved back to Minnesota 6 years ago to be closer to family. Pat passed away shortly after their move back home and, according to Bobbie, Jim had been a swinging bachelor since! Jimâ€™s favorite trip had always been going up to Hackensack, MN for two weeks every year. His dad would fill the 3hp motor of the 14â€™-16â€™ fishing boat with gas, and when the gas ran out, they were done fishing. Jim loved listening to 50â€™s music, country western, Patsy Cline, and Hank Williams and enjoyed watching TV, especially science and western times TV shows. He loved dogs and had one all of his life. Maddie is living with his stepdaughters and visited him frequently when he resided at Elk Ridge Alzheimer Care in Maplewood and Gable Pines Senior Living in Vadnais Heights. Services will be held at Mueller Memorial in White Bear Lake, 4738 Bald Eagle Ave, on Sunday February 9 th with a visitation from 1-3pm and the Funeral Service at 3pm. A special thank you to the staff at Gable Pines, the emergency crew and everyone who helped care for Jim over the last few years.
To order memorial trees or send flowers to the family in memory of James D. Compton, please visit our flower store.