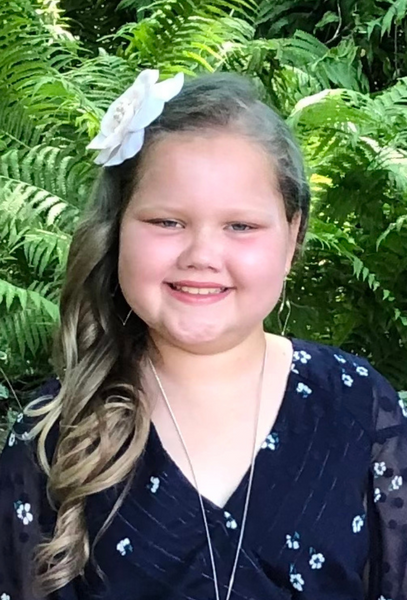 Kristina and Reginald (Reggie) Rasmussen welcomed their beautiful daughter Avery Morgan Rasmussen into the world on January 19, 2009. This cherub-faced child was born into a family surrounded by incredible love. Along with her parents, this family includes her devoted grandparents Claudette (Cleo) Rasmussen-Trcka and Robert (Bob) Trcka, who resided within a few miles of the family for the and were actively involved in all aspects of Avery's life. Avery was also welcomed home by her big "brother" Chopper, the family's wonderful yellow lab.

On May 4, 2011 Avery became very ill at home. Sensing that something was seriously wrong, her parents rushed her into the ER, where a lengthy series of tests led to an MRI. Midway through that scan, Reggie and Kristina hear the sickening words "the radiologist is on the phone with the oncology team." This led to a crushing diagnosis of T-Cell leukemia in this precious little girl's body.

The family's next 2 1/2 years were filled not with the normal hectic and often messy activities of raising a toddler and preschooler, but instead with the high anxiety, stress, and exhaustion of literally thousands of hours spent in clinics and hospitals battling daily for Avery's life. With the amazing wisdom and care of her medical teams, Avery finally went into remission. An epic outdoor celebration was thrown in late summer 2014 to celebrate this amazing news, and dozens of friends and family showed up for the momentous occasion. Avery began kindergarten that fall at St. Ambrose School of Woodbury, where she charmed all who met her through her adorable blond curls, captivating smile, and vivacious, outgoing personality.

In January 2015, the family embarked on Avery's Make-A-Wish trip to Walt Disney World. Immediately upon returning from the trip, the family received the crushing blow that Avery had relapsed. January through May 2015, the medical teams and family doubled down on fighting the cancer that had raged back. The ultimate recommendation was to have Avery undergo a necessary bone marrow transplant that took place on May 26, 2015. Another chapter closed on an excruciating journey, and Avery was eventually discharged from the hospital to resume life as normally as possible. She returned to school in September 2015 as a first grader with a beautiful bald head, but more importantly, at least twice as much wit and spunk that she had left with the winter before.

Avery's elementary school years were filled with friends, laughter, antics, and fun. Reggie and Kristina shared with their adventurous daughter their deep love of travel. The family enjoyed dozens of trips both within the United States, as well as European trips to London, Paris, and Germany/Austria in January of the consecutive years of 2018, 2019, and 2020.

Avery entered 6th grade in the fall of 2020 and embraced the change from elementary to middle school with the confidence and tenacity she was known for. She made multitudes of new friends, and was known for ensuring that no student was overlooked or left behind. Her kindness and authenticity continued to deepen and blossom as she transitioned from a girl into a young woman. She was often one of the last kids to climb into the car at the time of after school pick-up, because she was a social butterfly who needed to visit with many friends each day on her way out the door.

In late June 2021, Avery began to lose sensation and experience numbness in her left arm. A call to Children's Hospital resulted in a trip to the ER on June 21, and once again, the family heard the words they never wanted to hear. A 3-inch mass had been discovered in Avery's brain. This unwaveringly strong girl once again underwent major surgery on June 25 to remove the mass, and when the pathology was completed on the tumor, she was diagnosed with Grade IV glioblastoma, a very serious brain cancer that would once again involve a battle for her life. This warrior underwent the initial surgery, six weeks of radiation, many months of chemotherapy and immunotherapy, a second surgery on January 26, 2022, and a clinical trial based out of Michigan which involved eight trips to Ann Arbor and back between February and May of this year. Throughout all of this rigmarole, Avery continued to shine bright and complained very little. Her grit, tenacity, and fight has been an inspiration to all who encounter her.

Despite her epic battle and the love and prayers that surrounded her, Avery left us earthside on June 10, 2022, slipping away very peacefully in her sleep with her mommy and daddy beside her. Her uncle (Vahid Sadrzadeh), aunt (Kristy Kuhlmann), and grandma Cleo joined shortly after to surround Avery during her final hours in her wonderful earthly home. We told how very proud of her we are, and assured her that it was okay for her to have finally let go and to be at peace in the kingdom of heaven, free of all pain and suffering. During her final weeks, Avery was visited by dozens of family and friends, and was surrounded by incalculable love, laughter, and camaraderie, just like she had enjoyed during her 13 years of life.

Affectionately known until the end by the term of endearment "Baby" to those closest to her, Avery's impact on the world has been and will continue to be endless and immeasurable. As our dear friend Angela Miller recently wrote, "To know Avery is to love her. To love her is to be forever changed by her."

We will forever love and miss you, our beautiful spirited girl.

And so many other family members and friends

The family is grateful for the generosity that has been poured out already. In lieu of flowers, they have requested donations be made to one of two organizations in Avery's honor: Children's Hospitals of Minnesota - Oncology Clinic or University of Notre Dame Law School